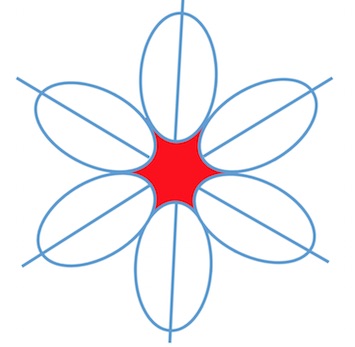 On the 25th of January 2017 the Greater Cambridge City Deal board voted to pursue a new plan for tackling congestion in Cambridge. The plan was illustrated at the meeting by a conceptual “petal diagram” which shows the main roads into the city with no roads providing connections between those radial roads. Notably the plan contains no inner ring.

Implementing the petal diagram concept in Cambridge would be quite dramatic:

However the City Deal officer presenting the petal plan to the board, Hilary Holden, gave a clear statement to the meeting:

There will not be road closures.

The chair of the City Deal Board Cllr Lewis Herbert reinforced this saying::

No means no and there will be no road closures as Hilary Holden has said. So there’s no plans to close roads. I think we got the message loud and clear.

Officer Hilary Holden approached me after the meeting and I asked about the plan:

Richard Taylor: How do you deliver your petal without closing roads? I can understand the people questioning how that’s going to happen?
Hilary Holden: It’s a case of what’s a definition of a closure, so closure can actually promote access, and there will be access to all parts of the network.
Richard Taylor: Do you mean a closure to through traffic as with the Addenbrooke’s example?
Hilary Holden: It’s closed to some traffic users, so there’d be potentially private cars might not be able to get through but that’s not a closure. You’ll be to get into it one way and from the other way so there will be full access.

Officer Hilary Holden had also expanded on the concept during the board meeting by saying:

What is going to take place is a prioritisation of uses on those roads, and access will be retained at all times, so there will be a difference to what is on the streets right now, but there won’t be full road closures for all vehicle movements, for all types of movements of the users of the streets.

Hilary Holden had also responded to a question asking for an explanation of the flower and petal diagram:

What I have been trying to get across with this flower and petal diagram is referencing the first elements of item 3a in the recommendations report, to follow on with what those are :

so that’s what the recommendation says, this aligns with policy TSCSC2 of the Cambridge and South Cambridgeshire Transport Policy which states that

Pedestrians, cyclists and buses will be prioritised for trips across the city. General vehicular traffic will not be prohibited and accessibility will be maintained, but a car journey may be longer and more time consuming than at present for many trips.

The petal diagram used in the joint assembly meeting and also included in my presentation today is purely conceptual and shows one of the draft ideas behind some of the work we are doing to develop options for managing general traffic, to retain access for those who need it while restricting cross city movements. It tries to show that the main routes coming into the centre are surrounded by quieter residential areas where rat runs need to be prevented. It’s this idea is less restricting than the peak time congestion control point approach as it restricts access on residential streets rather than the main arterial roads.

I think it makes sense to do what we can to encourage drivers to use the A14 and M11 to get around the city, and enter the city in the segment they want to access rather than driving through the city centre.

In my Milton Road consultation response to the City Deal I wrote:

In order to deter people driving down Milton Road to access the other side of the city I agree with proposals to break the inner-ring road. I think the principle which ought be followed is illustrated by the journey required to go from the back of the Guildhall to the front; it’s possible but convoluted. The aim should be to get as much motor vehicle travel around the city via the A14 and M11 as practical. Improved signage encouraging use of the A14 and M11 could help too. Some of the city’s signage still refers to the A45 which has not existed locally since 1994.

Signage is perhaps a bit out of date; what do we need to do to deter satellite navigation providers directing people through the city centre; I doubt they’ll respond to lobbying, but they would I suspect respond to longer routes, and longer journey times.

In the version of a petal diagram I’d go with I wouldn’t have a round, central, inner ring either, but I would retain convoluted routes around and within central area city.

As with lots of things what we have is a question of where we should be on a continuum from one extreme to another. In lots of ways we already are quite a long way towards the flower and petals concept in Cambridge. As I understand it there will be no new orbital roads connecting either Histon and Huntingdon roads though the new development there; nor between Huntingdon and Madingley Roads. There are no roads connecting Milton and Newmarket Roads until you come to Elizabeth Way in the city centre; there are no roads connecting Hills Road and Trumpington Road between Brooklands and Long Roads. The decisions on the new developments have been actively made recently, whereas the others have occurred organically due to the presence of the railway, commons, and the river.

We do need evidence; on Milton Road, which I raise as it’s where I live – how many people are driving from Milton, though the city centre and out to Addenbrookes for example? We should collect that kind of information then see what can be done to encourage the use of other routes, or means of transport. In that example new stations in Cambridge North and at Addenbrookes are likely to help, as will the improvements to the A14/M11 junction.

I think it’s important that any restrictions are clear and understandable by all, including visitors to the city and I don’t want an expansion of state tracking via ANPR to enforce any new restrictions on moving around Cambridge, on the grounds of excessive invasion of privacy.

I think it was notable the board’s rejection of the previous road closure plans was very specific, they resolved that:

No further work is undertaken on the package of six peak – time congestion control points consulted up on.

Other numbers, and arrangements, of closure points which have been put forward have not been ruled out.