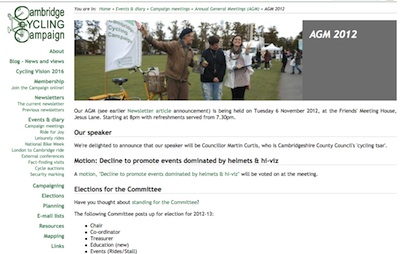 On Tuesday the 6th of November 2012 I observed the Cambridge Cycling Campaign AGM.

The meeting passed a motion allowing the campaign to reserve the right to decline to promote events where the use of helmets and high visibility clothing is required or implied to be required. The motion was passed by 44 votes to 10 with 6 abstentions

The text of the motion passed is:

“Cambridge Cycling Campaign supports all cyclists as they go about their lawful business on the public road. We note that the law does not require helmets or high visibility clothing. The image of cyclists presented to the public has become so strongly skewed towards riders wearing those items that the legitimacy and status of those who do not wear them is being undermined. In order to help restore the balance the campaign reserves the right to decline to promote events or activities where helmets or high visibility clothing are required or implied.”

The motion was debated, the arguments in favour are those outlined in the motion; arguments made against the motion included:

There were also questions about the impact if the motion was adopted as policy. The mover of the motion Simon Nuttall said it was about publicity, which the motion had already obtained, and about campaigning. It was noted that even the act of the campaign questioning those involved in cycling activities about the impression they’re giving about cycling requiring helmets and high visibility clothing might help promote change.

I tweeted the key elements of the presentation and subsequent Q&A session live:

My Other Tweets from the Meeting