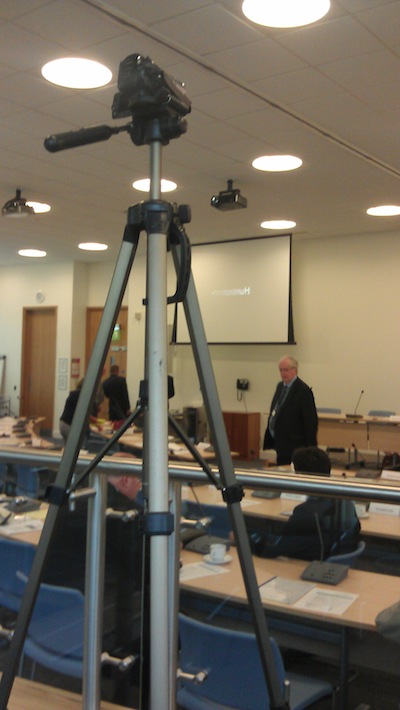 Cambridge City Councillors are to review the sections of the council’s constitution relating to people observing, speaking at, and reporting on council meetings at their Civic Affairs Committee meeting on the 17th of September 2014.

Ministers gave councils a month to update their rules before a new law on recording local government meetings was introduced. Cambridge City Council didn’t bring its constitution into line with the law before the law started to apply but are now considering doing so.

I am planning to attend the meeting to urge councillors not to create local rules which are not in-line with the law, and not to introduce additional restrictions to observing, reporting, and recording from council meetings.

Councillors are to consider, at the meeting, if to introduce rules to: “protect children, the vulnerable and other members of the public who actively object to being filmed”.

It is difficult to comment without knowing what, if anything, councillors might propose. I think the law allowing filming of everyone at council meetings is reasonable and I hope our local councillors don’t seek to undermine it.

Filming Cambridge City Council over the past few years has been challenging. The recent change in the law has I think been positive; at a recent committee meeting there were two people with video cameras, and someone with a professional camera and a dicta-phone recording proceedings; and that was activity which was overtly visible.

I would like to see councillors being a bit more positive; and making clear that merely taking notes, writing tweets, filming, or recording a meeting can not itsself be deemed disorderly and result in an individual being thrown out of a council meeting.

I also intend to raise a concern about the changes to the rules on throwing members of the public out of council meetings; and to draw attention to a missed opportunity to improve bring the councils rules and practices into line with each other in relation to public speaking at area committee meetings.

The proposed new section of the council’s constitution, to be introduced in light of the New Law on Filming Meetings of Local Government Bodies states:

The public may record ( e.g. film, audio, tweet, blog) meetings which are open to the public. The Chair of the meeting has the discretion to stop or suspend recording if in their opinion continuing to do so would disrupt proceedings at the meeting.

Those recording meetings are strongly urged to respect the wish of any member of the public not to be recorded. Agendas for, and signage at, meetings will make it clear that recording can take place. Anyone who does not wish to be recorded should let the Chair of the meeting know. Recording and reporting the meetings is subject to the law and it is the responsibility of those doing the recording and reporting to ensure compliance; e.g. with the Human Rights Act, the Data Protection Act and the laws of libel, defamation and public order. Freedom of speech within the law should also be exercised with personal and social responsibility – showing respect and tolerance to wards the views of others

I think the proposed text is reasonable and in-line with the law. It is not though positive and encouraging text such as that adopted by Cambridgeshire County Council which starts:

The Council supports the principle of transparency and encourages filming, recording and taking photographs at its meetings that are open to the public. It also welcomes the use of social networking websites (such as Twitter and Facebook) and micro-blogging to communicate with people about what is happening, as it happens.

I would rather see the council take that more positive line, if not in the constitution, then at least on its website, on meeting papers, and in chairs’ remarks when opening meetings.

It is not clear from the recommendation that deletion of the existing section of Appendix F A of the council’s constitution relating to audio/visual recording and photography is to be removed and replaced by the above text though the report makes clear that is the intent.

Councillors are though invited by the report to consider adding extra restrictions to filming, recording and reporting meetings which in my view would be incompatible with the law. I intend to urge them not to do so.

the Council needs to consider whether it should continue to include provision for those members of the public who do not want to be recorded. The legislation is silent on this aspect but the Government guidance published to coincide with the new law is as
follows:

“The council…..should consider adopting a policy on the filming of members of the public, and ensure that they protect children, the vulnerable and other members of the public who actively object to being filmed, without undermining the broader transparency of the meeting.

The “Government guidance” referred to is the Open and accountable local government: plain English guide. I think it is a great shame the “plain English guide” produced by the Government is at odds with the law. I had previously, while it was in draft form, suggested it ought be corrected.

Generally I think those who speak at council meetings are doing something in public and are generally seeking to influence public, civic, decisions and/or how public money is spent so should expect what they do to be recorded and reported.

I think the vast majority of those seeking to lobby, or ask questions to, councillors want their points to be heard and to reach as wide an audience as possible so are positive about recording and reporting on council meetings.

Recording and reporting what happens at council meetings can help representatives of campaign groups report back to their members on what has happened.

I am aware my footage from council meetings has been played to a meeting of the Cambridge Cycling Campaign for example. The campaign has also tweeted:

@RTaylorUK Thanks. Sadly some of us were not able to make the meeting, so filming very valuable.

It seems wrong to me for the council to seek to prevent the filming or recording of contribution which could be reported on the front page of the local paper.

Children from time to time make contributions to council committees. In particular at the annual council AGM there are cadets, and sometimes a work experience student, mentioned or participating during formal proceedings. There are also invited school pupils. I don’t see why there needs to be any special treatment for children; I think it would be wrong to start requesting the ages of those seeking to use the public speaking slot at council meetings.

I think East Area Committee Chair Cllr Blencowe made an excellent statement, which explained, and was in line with, the law at the start of a recent committee meeting:

I can request and I will happily do so if necessary that filming proceedings that those who may not wish to be filmed may be stopped on polite request to the person filming but unfortunately I cannot require that person to stop filming if they do not comply with that polite request. I can of course stop recording if it disrupts the meeting itseelf.

Access to Council Meetings for Members of the Public

36.2 In case of a general disturbance in any part of the Chamber or Room
open to the public the Mayor or Chair shall order that part to be
cleared.

The proposal before councillors appears to be to add a further section, within Part 4B on this subject stating:

The law also require the Council to ensure that reasonable facilities are afforded to citizen journalists and bloggers. This should include space to view and hear the meeting seats and ideally a desk. It states that councils should use their common sense to determine the range of reasonable facilities. (This council provides a desk at meetings in the Guildhall and free access to wi-fi)

I note that while there is wi-fi in the council chamber the password for it doesn’t appear to be proactively made available. I personally spotted the laminated card containing the password while observing a meeting in a committee room, but have never spotted attention being drawn to the facility in the chamber.

It is great to see this confirmation that the desk in the chamber is available to all.

Access to power points and toilets are other facilities the council provides; this is particularly useful during very long council meetings.

What actually happens at area committees, in particular during “open forum” agenda items is not reflected in the current rules, which officers are recommending remain unchanged.

In practice sometimes questions have to be submitted in advance on slips of paper made available at area committee meetings; and invariably at area committees the formal approach requiring notice, and giving three minutes per questioner with two minutes for a supplementary question or a response is not followed. The approach is much less formal which is sometimes to the benefit of public speakers, and sometimes not.

Sometimes an area committee is very open and inclusive; members of the public are able to contribute throughout, but at other times they are not. From my perspective the treatment of the public at area committees has been very inconsistent. That inconsistency and element of surprise is I think the biggest problem. When I attended my first area committee I saw “open forum” on the agenda and didn’t realise I would have to submit a question in advance to raise something. Someone attending an area committee but not being able to raise the point they came to make because they didn’t submit a question slip and for whatever reason the chair doesn’t ask if there are any others who want to contribute is something which still happens.

Where restrictions on contributions have from time to time been imposed, for example at the North Area Committee, it has not been clear if speaking during the open forum removed, or reduced, a member of the public’s ability to contribute during a subsequent policing agenda item.