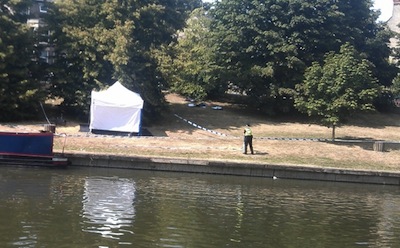 A public meeting of Cambridge’s Community Safety Partnership on the 23rd of July 2013 heard that the recent deaths of Kim Reid and Jimmy Sinclair on the banks of the River Cam, opposite Jesus Green, were due to “benzofuran” a drug of the amphetamine class which was marketed as legal form of MDMA (ecstasy).

It appears the council officer, Susie Talbot, who released the identity of the drug involved, perhaps considers the release of this information was a mistake, as she asked me not to tweet, or report on, her contribution to the meeting.

The first report of the deaths stated there had been arrests “on suspicion of supplying a class A drug” giving the impression the deaths may have been linked to warnings to heroin users issued a few weeks earlier.

A police press release issued at 15:12 on 23rd of July warned those attending the Secret Garden Party festival not to take drugs but did not specifically identify the drugs thought to have caused the recent deaths in Cambridge; saying merely: “the deaths of two people in Cambridge last week were linked to possible drug use.”

I think the state, the police, councils and others should be as open and transparent as possible about what they know; so people can make as informed decision as possible about taking drugs. Allowing an impression that there’s a problem with heroin in Cambridge but not giving due weight to concerns about risks associated with this alternative to ecstasy is in my view reckless.

I understand there may be other considerations, such as investigating the source, seeking to bring criminal convictions, and even checking the accuracy of initial conclusions; but I think transparency is the best option.

What Happened at the Meeting

While I was observing the meeting of Cambridge Community Safety Partnership on the 22nd of July 2013 I was approached in the public seating by Cambridgeshire County Council officer Susie Talbot, described as the leader of the Cambridgeshire Drug and Alcohol Action Team, who asked me if I was tweeting from the meeting and asked me not to tweet about the contribution she had just made.

My response was to point out it was a public meeting, and suggest that if there was something she wanted to raise in private, she ought to have proposed entering a private session. I had by then already written and published live tweets during her item.

Without the officer’s bizarre and in my view inappropriate behaviour I would probably not have considered her contribution to be worth writing specifically about, beyond the live tweets. Perhaps there was something in the presentation which was inaccurate, misleading, or she felt she should not have said. I got the impression perhaps it was the name of the drug she stated was responsible for recent deaths which she was concerned about publicising. No justification for the attempted “reporting restrictions” was made clear though.

Susie Talbot began her “Drug and Alcohol Action Team report: Update” with a rant about the Daily Mail’s coverage of the recent drug related deaths in Cambridge.

The latter article draws attention to the extent of the problems with drug abuse in Cambridge; which is perhaps something someone who has had a role in providing drug treatment services for a number of years is not proud of.

After complaining about the Daily Mail coverage, describing it as “unfortunate”, but not pointing to any factual errors, Talbot said that the “drug alert system” had not been used in Cambridge for many years, but had recently been used twice, latterly on the day of the deaths and related hospitalisations.

Talbot told the partnership that inter-agency working on the day had worked very well, and very quickly. She stated that her team had been able to contact “service users” with a warning by 4pm on the day when the deaths had occurred at midday. Talbot said the accident and emergency consultant at Addenbrookes was very quick to identify the problem, link the cases, and kick off the NHS’s own systems, involving public health services, for responding to the situation of a toxic drug in circulation; and eventually the council had been involved too, with disseminating the warnings.

Talbot told the partnership that the identity of the drug involved was known very rapidly, by the time her team issued the warning at 4pm on the day, but a decision was taken to state the identity of the drug was unknown. She also told the partnership that an active decision was made not to describe the way the drug was formulated or packaged as they didn’t want to give the impression that if a capsule wasn’t yellow, for example, it was safe, and instead put out a message suggesting using trusted dealers and sticking to known substances – “make sure you know what you’re taking” – being the core of the message.

The drug involved was described by Talbot as “amphetamine based”; it was named, but due to poor acoustics, and no speakers being turned on in the public speaking area, and Talbot facing away from the public while speaking I didn’t quite catch what she said. My notes, based on recording what I heard phonetically, say “benzythermn”. Talbot added the drug had been banned by the Government in June.

The The Misuse of Drugs Act 1971 (Temporary Class Drug) Order 2013 which came into force on the 10th of June 2013 bans benzofuran substances. Benzofuran appears, with a high degree of certainty, to match what I heard. The Home Office Circular accompanying the temporary banning order states:

The benzofuran substances … are commonly sold under the brand name ‘Benzofury’ and marketed as a legal form of MDMA, available in the form of powders or tablet (although the latter is referred to as “pellets” to avoid overt suggestions that it is for human use). The ACMD advise that some users experience adverse effects, including MDMA like symptoms. Several deaths and hospitalisations in the UK have been associated with these compounds, albeit mostly with other drugs.

Talbot stated the incidents a month ago, which also triggered warnings, were different, and due to “strong heroin”.

I also reported live on a follow-up contribution from the police:

The meeting’s papers contain a paragraph on the heroin related issue, which occurred a few weeks before the deaths by the riverside opposite Jesus Green:

On Wednesday 19th June, 5 non fatal overdoses were reported to Cambridgeshire DAAT, 3 of which
occurred in a one hour period. The partnership work which followed between the DAAT, Cambridgeshire Constabulary, Public Health, Inclusion Drug Treatment Service and Link–Up and Feedback (independent service user group) to trigger the alert system, was outstanding. The purpose of which was to ensure that all agencies and service users were informed that this incident had occurred, to try and keep individuals safe and to try and prevent a fatal overdose from occurring. Following this incident the DAAT has reviewed its Alert system to ensure that the level of gravity is clear to recipients and what action is required

After the meeting, while seeking a copy of an unpublished meeting paper from the meeting’s clerk, I told Cambridge City Council officer Liz Bisset (Salary £91,891/year) who was chairing the meeting about the officer’s attempt to impose “reporting restrictions”. Bisset suggested that officer Susie Talbot may not have been aware there were any members of the public present at the public meeting; raising the rather surprising suggestion that the partnership’s meetings, or other meetings at which decisions about how the city is run, might well run quite differently when no members of the press or public are there to observe what’s happening. Officer Bisset suggested that that naming the drug responsible in public was likely to be officer Talbot’s concern, but didn’t explain why that would be a problem.